Earlier in the week we highlighted the mesmeric and exotic quality of Indian classical music as an attractively different and memorable form of entertainment at a wedding. Although the musical style is gaining general popularity outside of the Asian community in the UK, there isn’t as yet a huge number of top-quality Indian musicians performing at public or private events.

However, one of the best examples of a classical Indian band is Strings Sitar Fusion, who present a wonderful selection of of traditional acoustic music at all kinds of events, including weddings, all over the country.

As the name suggests, the ensemble’s unique, lilting sound is based around the evocative strains of a sitar, gently stating and supporting the melody and giving their music an unmistakable Indian feel. These expressive and inviting melodies are combined with the rhythmic drive of hand-played tablas to create the central pulse of the band.

This duo will suffice for more intimate occasions, providing low-key background music perfect for developing an interesting atmosphere at your drinks reception or during dinner. The band can easily augment to a trio or quartet, adding keyboard and then bass to the mix. Male or female vocals can additionally be provided to breathe life into the songs and give an other-worldly texture to the music where appropriate.

Versatility to suit any occasion

With such a wide range of options on offer, Strings Sitar Fusion are able to deliver a line-up appropriate to wedding parties of all sizes and provide entertainment suitable for any part of the day. In general the music is selected from the ragas of the Indian classical repertoire, alternating with melodious tunes and songs from the regional folk-music tradition, all spiced up with some Western and other interesting multicultural influences.

The ensemble provides all their own equipment, including, where necessary, a PA system suitable for most venues. They perform in traditional Indian dress, and are able to introduce a troupe of Indian dancers to their performance to enhance the visual spectacle and create an exciting main event.

A tremendous pedigree and bags of experience

The band has many years of experience, having been formed in 1994 by well-respected musicians Anu Shuklar and Kiran Thakrar. Kiran is a multi-talented keyboard player, composer and music producer, and has performed at more than 4000 concerts across the globe. Anu is the principal vocalist with a massive reputation, also acting as the creative director of the ensemble.

Having performed at a wide range of public and private events all over the world, Strings Sitar Fusion have the expertise and experience to put on a wonderful and memorable show at your wedding.

Strings Sitar Fusion specialise in playing a unique blend of Indian classical music that is perfectly suited to a wedding occasion. Driven by sitar and tablas, with the option to add further instrumentalists and vocalists if you require, the band has a wealth of experience and a burgeoning reputation developed over many years of live performance. If you are looking for an exotic, mesmerising and truly memorable musical backdrop or centrepiece to your wedding anywhere in the UK, look no further than Strings Sitar Fusion. 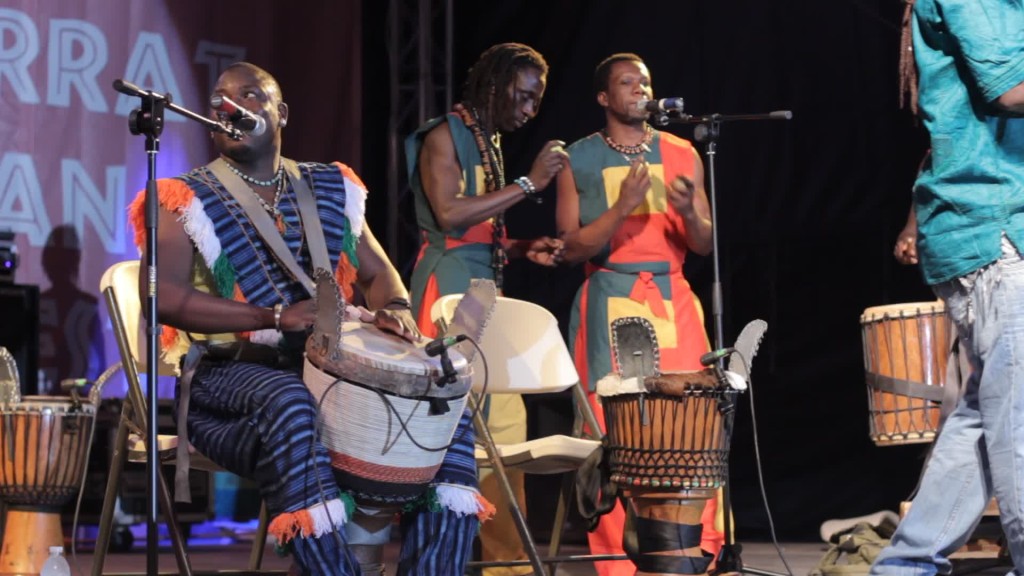 In Mandinkan, “jali” means musician and “kunda” means home. Jalikunda, then, means “musician’s home”. It’s an apt name for this vibrant group of young African musicians and dancers. Their performance blows new life into the ancient folk culture of their homeland in West Africa. As they travel across the globe, performing the music and dances of the land of their birth, their music takes them to their spiritual home!

The ancient roots of Jalikunda’s music

The ancient musical traditions of West Africa trace their ancestry right back to the 13th century Malian Empire. The rich Mandinkan tradition of songs, stories and dance, with its central message of peace and harmony, has been preserved down the centuries by The Griots – a professional caste of musicians and storytellers who handed down the precious legacy from father to son and mother to daughter as the years rolled by.

The Mandinkan spirit is as alive today in the music of Jalikunda as it was way back then. Watch this video of Jalikunda’s performance at Montserrat African Musical Festival 2013 and judge for yourself …

Mamadou Cissoko, bandleader and virtuoso kora and djembe player, was himself was born in Lindiane, a leafy superb in the lush green region of Casamance, Southern Senegal. He inherited the Griot tradition from his mother’s family and in particular from his late grandfather, Jali Kemo Cissokho, who taught him to play the kora (the 22-stringed African harp) from the age of five.

The Mandinkan tradition: togetherness through music

The magical Mandinkan aural legacy of songs of praise, folk wisdom and shared history was nurtured down the centuries by a professional caste of musicians and storytellers called Jalis or Griots – historians, praise singers and master musicians. The spirit of their performance is suffused with an underlying traditional Griot message of communal harmony and brotherhood.

The present-day members of Jalikunda bring this ancient musical tradition bang up to date. In true Mandinkan musical style, their infectiously joyful and warm performance brings the audience and the performers together, communicating peace and love through the universal language of music.

West Africa stretches from the tropical equatorial forest of Guinea northwards to the more temperate but equally lush coast of Senegal. Eastwards, it snakes 700 miles along the winding River Gambia to the fabled outpost of Timbuktu in Mali, on the southern edge of the burning Sahara Desert. In the far north, the desert of Mauritania dominates, bordering on the Arab dominated Morocco.

West Africa contains ancient and modern histories as diverse as the changing landscape. In Gambia, the official language is English. In Guinea Bissau, Portuguese is spoken. In Senegal, Mali and Guinea it’s French. These colonial languages make communication easier for travellers as West Africans share literally hundreds of dialects and most speak at least a little of four or five languages.

Despite differences of geography and language, the ancient aural Mandinkan legacy of music and dance bubbles beneath the surface in all these places, providing a sense of shared culture that transcends this modern diversity.

On the 15th March, 2014, you can experience the warm and wild spirit of West Africa at Salem Cricket Ground on the Caribbean island of Montserrat, as the band takes part in the 2nd Montserrat African Festival. Come and watch, clap and sing – join in and experience the sense of togetherness the performance generates. It’s guaranteed to be an intoxicating experience!

Montserrat hosts the 1st Festival on African Music in the Caribbean

The tiny Caribbean island of Montserrat places itself firmly on the map by hosting the 1st Festival of African Music to be held in the English-speaking Caribbean.

In 2014, the Montserrat African Festival is proud to feature the venerable Grand Master of South African music –Tuku – at the top of the bill. By popular request, Jalikunda returns to Montserrat to join this year’s festival line-up to provide a further burst of joyful and energising African dance and drums.

The open air concert takes place on March 15th on a specially constructed stage in the centre of Salem Cricket Ground. The music kicks off at around 8.00pm in the evening with the massive party continuing into the early hours of the morning. Find out more about the festival here:-

English catholics arrived on Montserrat from St Kitts in 1632 to set up the first colonial plantations. 17 years later, this tiny island the other side of the world provided the perfect place for English protestant republican Oliver Cromwell to dump his dissident political adversaries after the pacification of Ireland and Irish Catholics arrived by the boatload.

Plantations of tobacco, cotton and sugar require a large cheap manual labour force to run efficiently and profitably. Enter the slaves. From 1660, a steady flow of Africans captured along the Guinea coast, transported half way round the world and sold as slaves increased the population on Montserrat, often managed by Irish overseers.

In 1768, an insurrection by the slaves on St Pats Day, overcoming their Irish bosses who were partying in time-honoured Irish style was brutally put down. The slaves had to wait until 1834 for emancipation. The spirit of the oppressed black population represented by this failed uprising is a big part of the underlying spirit of the present day St Pats celebrations on Montserrat.

Montserrat forges a new identity out of adversity

Until 25 years ago, Montserrat provided an idyllic home to 12,000 people. The island also hosted Sir George Martin’s paradise musical retreat for world pop and rock ‘n’ roll greats. The devastating destruction of Hurricane Hugo in 1989, followed by the eruption of a dormant volcano in 1995 changed all that.

A further cataclysmic volcanic eruption in 1997 that lead to 19 deaths sealed the island’s fate. The island’s economy was convulsed by the emergency. Two thirds of the population were forced to flee the island and today over half the island – including the capital city and the majority of the island’s original infrastructure – lies abandoned, buried in brown sea of mud and ash.

Montserrat now flies in the face of adversity to become the first location in the English speaking Caribbean to hold a musical celebration of the African roots of a large part of the population. The festival of part of an imaginative initiative by the Government of Montserrat to find new ways of kick-starting the island’s economy with a view to making the island economically self-supporting in the future.

Outside of Ireland itself, the tiny Caribbean island of Montserrat is the only other place in the world to celebrate St Patrick’s Day with a public holiday. The island indulges in a week’s worth of festivities to celebrate the great Irish saint.

On Montserrat, the St Pat’s festivities have become a time for families to get together and for kids working abroad to come home to celebrate and visit friends and family. In many respects, the St Pat’s week has become a week to celebrate Montserrat’s identity. Since the majority of the population of the island has African roots – what better time to choose to hold a festival of African music?

Come back for more about Montserrat: the tiny island with a big story, to find out how this tiny island triumphs over adversity to present a unique modern twist of St Pats extending the brief to include the celebratation of the island’s African identity in time-honoured Irish St Pat’s tradition – with a great big, gi-normous party!