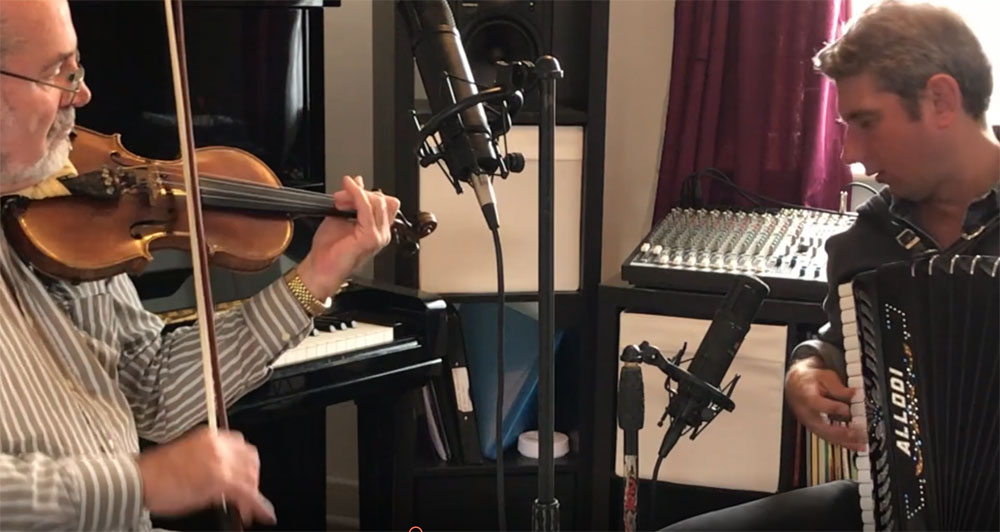 THE LITTLE BIG CEILIDH DUO for festival ceilidhs and contras

Posted by Jennie Evans / 0
THE LITTLE BIG CEILIDH DUO is available to book for festival social ceilidhs and contras. The duo features the explosive playing of Eddy Jay on accordion and Mike Evans on fiddle. It’s a little band with a really big sound. These two guys fire off each other to create a rich, intense and energetic performance.

Mike and Eddy play a full repertoire of English country dance music and American contra tunes, and both are also fluent readers of standard notation, able to play any dance music visiting callers might require.
Interested? Email Jennie Evans – jennie.evans@hoptiludrop.co.uk – or call on 07980 643988 to discuss.

The performance is designed for dancing. The skill of the musicians in setting the speed and precisely shaping the phrases with elegance and grace puts a spring in the step and adds lightness to the touch. It is musical magic. Watch the guys play “Hunt The Squirrel” – a gigue from Playford’s “The Music Master”:-
American tunes for contra dances have a completely different feel. The music exudes energy and rhythm and requires more insistent pulse and drive. Eddy and Mike are well up to the change in style. Watch this joyful version of the American old-time reel “Dinah”. There are only two musicians playing but – my goodness – it surely sounds like more:-

Eddy grew up in a family steeped in the English dance tradition. The spirit of the dance is in his blood. His recent partnership with Will Pound – featured on the album “Ignite” by Pound and Jay has taken him to festival stages throughout the UK, Europe and even to Australia. Tom Robinson (BBC Radio 6) says of Eddy’s playing – “The wild man of the accordion Eddy Jay creates sounds you just wouldn’t credit coming out of the instrument.”
Eddy also performed in the stage musical version of Noel Coward’s “Brief Encounter” (Kneehigh Theatre) and has performed with Cathal Coughlan and Tina May. He has also devised and toured with his own theatre show based on Prokofiev’s “Peter And The Wolf” and a musical biography of Edith Piaf.

After Stackridge, (including a prestigious album recorded by Beatles’ producer George Martin). Mike Evans has enjoyed an exceptionally varied career – from touring the UK with Don Everly (The Everly Brothers) and Albert Lee to leading The Bath Pump Room Trio and The Bath Georgian Festival Orchestra.
Mike’s exploration of his instrument in all its styles and forms has taken him in on a fascinating musical journey. Although he is quite at home playing the violin in a courtly Baroque ensemble or string quartet, he has also followed the humble fiddle all round the UK and Europe – to the New World with the great migrations, and then back again to Europe with Gypsy Swing. The study of such a variety of musical influences lends an unusual stylistic richness to his playing.

THE LITTLE BIG CEILIDH DUO enjoy an uncanny, magical rapport. The music itself dances. It’s hard to stay still, the rhythm is so infectious. Fingers fidget and toes tap, your whole body moves and you’re swept up into the flow.

Other posts by Jennie Evans