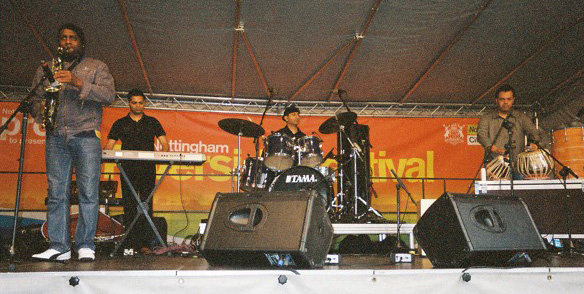 Bollywood Grooves present Indian Bollywood music at its very best. Look forward to being entranced by exotic and eminently danceable Indian Bollywood classics and latest hits, performed with panache and presented in colourful costume that not only creates a brilliant visual spectacle, but also sets toes tapping, filling the dance floor.

Bollywood music is a synthesis of ancient Indian music and dance tradition with the technicolour romance and magic of Bollywood cinema. Thus old meets new, creating a vibrant fusion of Western pop culture and jazz with venerable Indian music and dance-forms. It is the perfect musical vehicle for an Indian-themed party.

Find out more about booking a live band for your wedding.

Bollywood Grooves present you with the most popular Bollywood classics, performed with an energy and excitement that is guaranteed to fill the dancefloor. The basic five-piece line-up is comprised of male or female vocalist, sitar, keyboard, saxophone and Indian percussion / drums.

For larger events, the band can include both male and female vocalists, and is also able to introduce a troupe of exotic Indian dancers that combine with the musicians in a spectacle that brings the Bollywood musical film to life before your very eyes.

For smaller Indian-themed events and drinks receptions, the band can provide a sax – tabla duo to set the scene, Bollywood style. The Indian theme is firmly established as your guests enter the room.

If dancing is required at a small event, the band can perform as a trio, comprising singer, keyboard and Indian percussionist, to get the party going.

East meets West in the fusion that is Bollywood

Ancient Sanskrit Drama, the traditional Folk theatre that became popular in India from the 10th century onwards, and Parsi Theatre, although each very different from the other in their individual realisation, are unified in their presentation of drama as a combined theatrical fusion of music, dance, narrative and spectacle.

This strong Indian tradition of narrating stories, myths, legends and fairytales through music, dance and song found a ready-made cinematic vehicle in the unashamedly romantic Broadway and subsequent Hollywood Musical genre which had developed from the 1930s – 1950s and entertained in a very similar way.

The very name ‘Bollywood’ is itself an unambiguous form of homage to its earlier counterpart – the American Hollywood-based movie business. Since its inception in the 1930s, the Indian film industry has maintained the all-singing, all-dancing musical comedy and musical epic as central genres that have become so popular across the Asian sub-continent and beyond that the international audience for Bollywood films now far exceeds that of their American counterparts.

Bollywood is Indian magic and romance in flamboyant style

The songs that have been popularised in the Bollywood musical films of the last five decades have become popular in their own right across the Indian sub-continent. Bollywood music has become a form of Indian national pop culture that fuses Western pop styles with traditional Indian musical forms.

Hollywood itself has further popularised the Bollywood musical film genre by weaving the form into hit films such as ‘Moulin Rouge’ and most recently using it as the basis for the box-office smash ‘Slum Dog Millionaire’. These films have created a new world-wide coterie of fans for Bollywood music.

Reaching back into the mists of time in India, myth, legend and fairytale have always been presented in a colourful, dramatic form that alternates and interweaves narrative, music and dance in a combined theatrical spectacle.

Other posts by Jennie Evans